In the previous article on Writing a Memory Allocator we discussed and implemented a generic memory allocator. We have seen how a memory is requested from OS (through the memory mapping), and in particular focused on different strategies of the Free-list allocation.

In today’s lecture we’ll be discussing a Pool allocator.

Available coupons:
Support this project
If you like this work and find it useful, consider donating to support ads-free and high-quality education.

A Pool allocator (or simply, a Memory pool) is a variation of the fast Bump-allocator, which in general allows O(1) allocation, when a free block is found right away, without searching a free-list.

To achieve this fast allocation, usually a pool allocator uses blocks of a predefined size. The idea is similar to the Segregated list, however with even faster block determination.

The approach can greatly speed up performance in systems which work with many objects of predefined shapes. For example, in a gaming app we may need to allocate hundreds, if not thousands of objects of the same type. In this case a fragmented malloc might be a source of a slower allocation. That’s why gaming consoles actively involve memory pools for such objects.

So, let’s dive into the details, and implement one.

A pool allocator operates with concepts of Blocks (Pools), and Chunks within each block.

Each chunk is of predefined size, and encodes the Object header, which stores a meta-information needed for Allocator’s or Collector’s purposes.

Let’s start from the chunks first.

Since the size is predefined, we don’t need to store it in the header, and only can keep a reference to the next object. We represent an allocation as a Chunk structure:

When a chunk is allocated, Mutator (the user code) can fully occupy it, including the space initially taken by our next pointer. For this reason, we don’t even need a flag whether a chunk is free — this is solved by the Allocation pointer which always points to a current free chunk, as we will see shortly.

Here is the picture how the free chunks look in memory:

So, — a simple linked list of all available free chunks. Notice again how the allocation pointer is set to the current free chunk, which will be found right away on allocation request.

And once some objects are allocated, the allocation pointer is advanced accordingly, and still points the current free chunk, ready to be returned right away.

To support this fast allocation, the memory for chunks should already be preallocated. This preallocation is exactly known as a pool of objects, and which we call as a Block in our implementation.

A block though is not represented as an actual separate structure in our code. It’s rather an abstract concept, which groups the chunks by just allocating enough space to store the needed amount of chunks.

The size of a block is determined by the number of chunks per block.

Let’s start defining our PoolAlloctor class, accepting the number of chunks as a parameter:

As we see, the class keeps track of the allocation pointer (mAlloc), has private routine to allocateBlock when a new block is needed, and also provides the standard allocate, and deallocate methods as public API.

Let’s focus on the allocation first.

To satisfy an allocation request, we need to return a pointer to a free chunk within a current block. However, when there are no chunks left in a current a block, or when we don’t have any block yet at all, we need to allocate a block itself first — via the standard malloc mechanism. The sign for this is when the allocation pointer mAlloc is set to nullptr.

The size of the large block is the number of chunks per block, multiplied by the chunk size. Once the block is allocated, we also need to chain all chunks in it, so we can easily access the next pointer in each chunk.

As a result we return the Chunk pointer to the beginning of the block — the blockBegin, and this value is set to the mAlloc in the allocate function.

Now let’s get back to the allocate, and handle the chunks allocation within a block.

OK, we can now Bump-allocate chunks within a block, and malloc-allocate the blocks from OS. Now let’s see at the deallocation.

Deallocating a chunk is simpler — we just return it at the front of the chunks list, setting the mAlloc pointing to it.

Here is the full code of the deallocate function:

The next figure shows how the allocation pointer is adjusted after the block A is freed, and also how the next pointer of the returned block A points now to the previous position of the mAlloc: 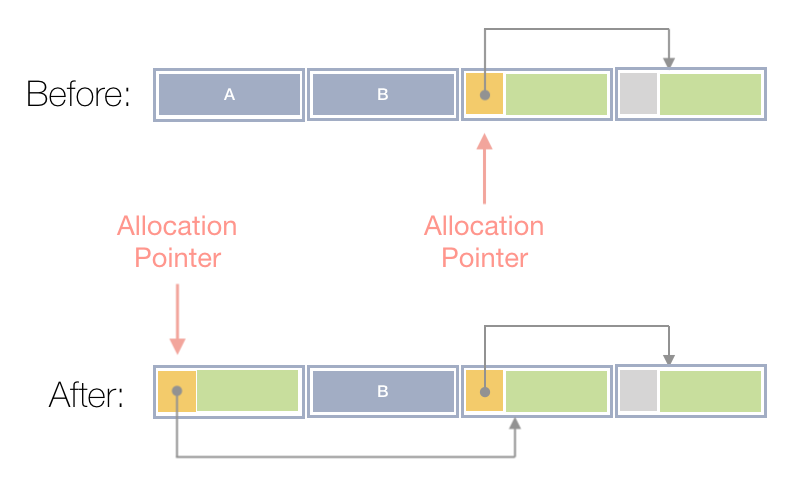 Now when we can allocate and deallocate, let’s create a class with our custom pool allocator, and see it in action.

C++ allows overriding default behavior of the new and delete operators. We use this advantage to setup our pool allocator, which will be handling the allocation requests.

Once the allocator is declared and instantiated for our Object class, we can now normally create instances of the Object, and the allocation requests should be routed to our pool allocator.

Finally, let’s test our allocator, and see the management of the blocks and chunks in action.

As a result of this execution you should see the following output:

Notice, that specific addresses may be different on your machine, however what important here, is that the objects (chunks) in a block are dense-allocated with a Bump-allocator, following one after another.

Also notice how we started reusing the address 0x7fb266402ae0 when all objects were deallocated, and we received a new allocation request.

A pool allocator is a useful and practical tool, which you can use to speed up your app in case of many predefined size objects. As an exercise, experiment and extend the allocator with some other convenient methods: for example, allow deallocating a whole block at once if requested, and returning it back to the global OS allocator.

You can find a full source code for this article in this gist.

You can also enroll to full course here:

Let’s do a quick recap of the Pool allocator topic:

I hope you enjoyed this lecture and found it useful! As always I’ll be glad to answer any questions in comments.

Support this project
If you like this work and find its useful, consider donating to support ads-free and high-quality education.